You’re lying on a beautiful beach when you feel a tap on your shoulder, and suddenly you’re not at the beach at all — you’re in a classroom. The student who woke you looks apologetic, and from the front of the room the teacher is staring at you expectantly. He points at the blackboard on which he has written the function f(x) = 6x − x3 next to its graph. “I said: how can we find the maximum value achieved by this function on the interval from 0 to 2?” 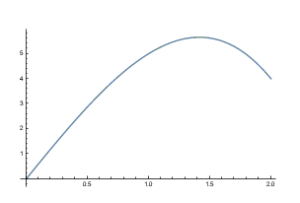 A pleasant dream has been replaced by your worst nightmare. But into your still-sleep-fogged conscious mind rises a catchphrase, your only chance for salvation. “Um… Take the derivative and set it equal to zero?”

The professor beams and tells the class “You see? It’s so easy, you can even do it in your sleep!”

This event took place nearly forty years ago (my friend Dan Ullman was a teaching assistant and saw the whole thing, though the function being maximized and the student’s dream were probably different). The story highlights one feature of doing “cookbook-calculus”: you can survive just following the recipes.

But what I want to talk about is what happens next in that classroom, and its broader significance. Because when you differentiate the function 6x − x3 you get the function 6 − 3x2, and when you set this expression equal to 0 and simplify you get x2 = 2 — an equation that has no solution in the rational numbers.

And the square root of two is nice compared to some of the other beasts that await you in calculus class. If you take the derivative of 10x, you get 10x times the irrational number ln 10. Or if you take the derivative of the sine of x (where the angle x is expressed in degrees), you get the cosine of x times the irrational number π/180. 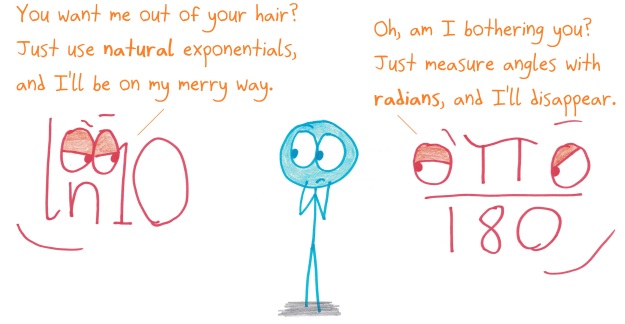 You can get these annoying multipliers to go away, but at a steep price: banishing the former requires accepting the irrational number e as the One True Base, while banishing the latter means worshipping at the altar of the Arch-Irrational, π. (I jest, of course.)

Why does calculus involve so many irrational numbers? A course in theoretical calculus (also called real analysis) can shed light on the issue. One digs underneath the function-concept to re-explore the number-concept and one finds that the properties of the number-line discussed in high school simply don’t suffice to get the calculus-motor up and running. One needs an extra ingredient in the fuel, called the completeness property of the reals. To paraphrase Obi-Wan Kenobe: The completeness property of the reals is what gives calculus its power. It surrounds the set of real numbers and penetrates it. It binds the number line together.

If we tried to do calculus using just rational numbers, neither the Intermediate Value Theorem nor the Extreme Value Theorem would be true: for, if we restrict x to rational values, x2 − 2 is sometimes positive and sometimes negative but never zero, while 6x − x3 approaches but never achieves a maximum value. (See this Stack Exchange discussion to learn more about what goes wrong with calculus when you try to use only rational numbers.)

And now I can get to the real point of this essay. The theorems of the calculus that work for the reals but fail for the rationals, despite the very different claims they make, are all equivalent to each other! That is, if you’re dissatisfied with the rational number system and are looking to upgrade, and you go to the number-system store and say you want a number system that has this feature or that feature, most of the time the sales clerk will reply “Sounds like you want to buy the real numbers.” It’s a package deal; for the price of one feature, you get them all. (See this article to learn more about calculus theorems that are equivalent to the completeness property.)

As I mentioned last month, my favorite theorem-secretly-equivalent-to-completeness is the Constant Value Theorem: it says that if the derivative of a function is 0 everywhere, then the function must be constant. Obvious, right? But if you try do calculus using the rational numbers in place of the real numbers as your “everywhere”, the theorem fails. To see why, look at the function f(x) = sign(x2 − 2): it’s +1 where x2 > 2 and it’s −1 where x2 < 2 (no fair asking “What about where x2 = 2?” since we’re restricting to rationals). 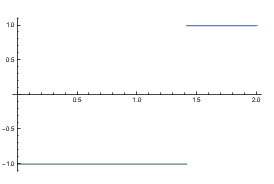 Before I end I should probably subvert the jokey title of this essay a bit. The incursion of irrational numbers into mathematics long predates calculus. The ancient Greeks noticed that if you try to measure both a side and a diagonal of a square using the same measuring-stick, you’ll run into trouble. If you use half-a-side as your measuring unit, the diagonal isn’t quite three measuring units long, though the approximation isn’t bad; that’s because the diagonal is slightly less than 3/2 as long as the side. Likewise, if you use a-tenth-of-a-side as your unit, you’ll find that the diagonal is just a hair over fourteen units long; that’s because the diagonal is slightly more than 14/10 as long as the side. There’s no length-unit that does the job exactly, because there’s no fraction whose square is exactly two.

But the Greek mathematician Eudoxus of Cnidus realized that even though the question “For what whole numbers m and n is the diagonal of a square m/n times as long as the side of the square?” has no right answer, each wrong answer is wrong in a consistent way, regardless of which square you’re looking at. That is: whether the square you’re looking at is big or small, the ratio 3-to-2 is always too big and the ratio 14-to-10 is always too small; and so on. Eudoxus realized that being able to compare the square root of two with ordinary numbers like 3/2 and 14/10, and decide in each case which approximations are too big and which are too small, allows us to pin it down with whatever precision we want, and that this ability to compare is good enough not just for all practical purposes, but for all theoretical purposes as well.

Eudoxus’ solution to the problem of irrational numbers (or, expressed in less anachronistic terms, the problem of incommensurable magnitudes) is so satisfactory that most mathematicians dislike the way the mathematical sense of the word “irrational” chafes against its everyday meaning (at least in the languages I’m familiar with). Given that the word “irrational” means “unreasonable”, it’s reasonable for nonmathematicians to infer that irrational numbers must be resistant to human reason, but that natural surmise is a couple of millennia out of date.  A number like the square root of two is only irrational in the sense that it can’t be expressed as a ratio of whole numbers (ir-ratio-nal; get it?). Likewise, calculus isn’t beyond the power of the human mind, though we humans are still working on the problem of how to teach it well to junior members of the species.

But calculus does have many surprises, not least of which is how certain irrational numbers like π keep popping up as the answer to many seemingly unrelated questions. Perhaps the most surprising thing about calculus, and about mathematics more broadly, is what physicist Eugene Wigner called the “unreasonable effectiveness” of mathematics in describing our universe. To plumb that mystery, we’ll need to find a vista from which we can have a clearer picture of what a different, less reasonable kind of universe might look like. Reason alone won’t take us there.

10 thoughts on “Calculus is Deeply Irrational”