Bella: You gotta give me some answers.

Bella (interrupting): I don’t want to know what the square root of pi is.

Edward (surprised): You knew that?

END_OF_DOCUMENT_TOKEN_TO_BE_REPLACED

“As far as God goes, I am a nonbeliever. Still am. But when it comes to a devil — well, that’s something else.”

Sometimes a key advance is embodied in an insight that in retrospect looks simple and even obvious, and when someone shares it with us our elation is mixed with a kind of bewildered embarrassment, as seen in T. H. Huxley’s reaction to learning about Darwin’s theory of evolution through natural selection: “How extremely stupid not to have thought of that.”

This phenomenon often arises as one learns math. Mathematician Piper H writes: “The weird thing about math is you can be struggling to climb this mountain, then conquer the mountain, and look out from the top only to find you’re only a few feet from where you started.” In the same vein, mathematician David Epstein has said that learning mathematics is like climbing a cliff that’s sheer vertical in front of you and horizontal behind you. And mathematician Jules Hedges writes: “Math is like flattening mountains. It’s really hard work, and after you’ve finished you show someone and they say “What mountain?”” 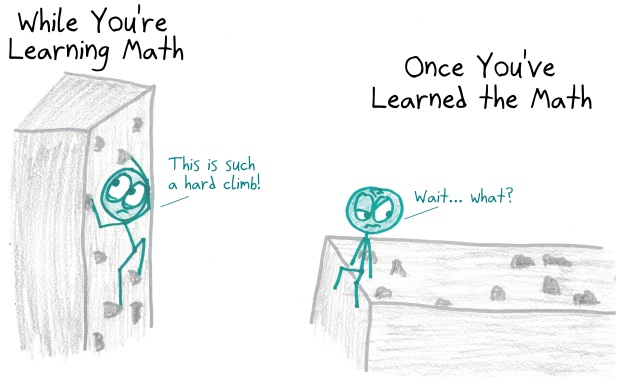 Drawings by Ben Orlin. Check out his webpage: https://mathwithbaddrawings.com/

END_OF_DOCUMENT_TOKEN_TO_BE_REPLACED

“You don’t have to believe in God, but you should believe in The Book.”

Creating gods in our own image is a human tendency mathematicians aren’t immune to. The famed 20th century mathematician Paul “Uncle Paul” Erdős, although a nonbeliever, liked to imagine a deity who possessed a special Book containing the best proof of every mathematical truth. If you found a proof whose elegance pleased Erdős, he’d exclaim “That’s one from The Book!”

I’m a fan of Erdős, but today I’ll argue that the belief that every theorem has a best proof is misguided.1

END_OF_DOCUMENT_TOKEN_TO_BE_REPLACED

“If you have arugula, basil, celery, dandelion, and endive leaves, how many different tossed salads can you make?” That question, or something like it, was asked in a Math Bowl that I participated in back in high school, during my halcyon days as a mathlete.1 Actually, “halcyon days” are supposed to be calm days, and quiz-show-style math-smackdowns aren’t known for being calm.  It was certainly an un-halcyon moment when my Math Bowl teammates were urgently saying we should buzz in with the answer 32 to that salad question, and I was saying we needed to figure out whether the judges would think that a bowl containing no ingredients at all was a valid salad.  While we were debating the issue, the other team buzzed in with the answer 32, only to be told “That is incorrect.” Our team immediately buzzed in with the answer 31, which seemed likely to be the answer the judges were looking for.

We got the points, but I liked the other team’s answer better. The idea of an empty salad might seem like a purely mathematical fancy, but half a dozen years later I saw a restaurant menu that offered the null salad, or rather “Nowt, served with a subtle hint of sod all” (for the unbeatable price of 0 pounds and 0 pence).2 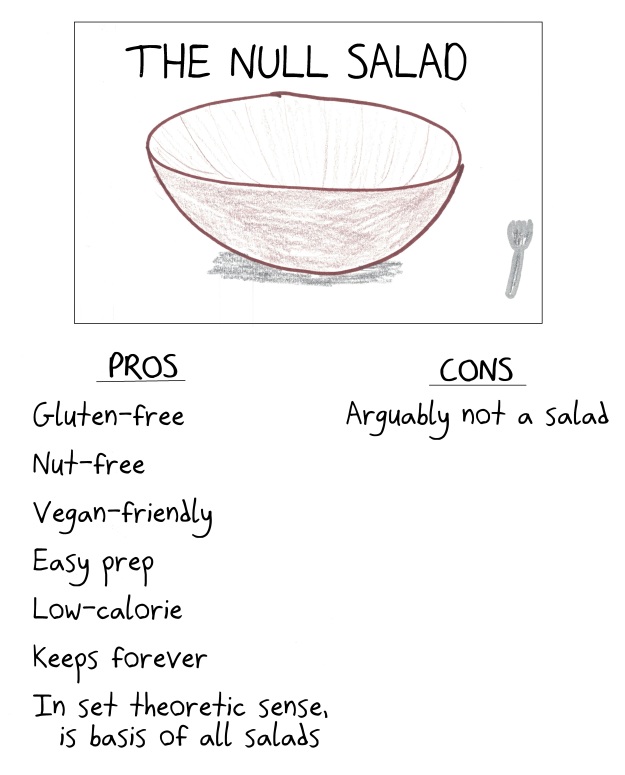 Cartoon by Ben Orlin. Follow him on Twitter @benorlin! Read his blog at https://mathwithbaddrawings.com! Buy his books from your local independent bookseller!

END_OF_DOCUMENT_TOKEN_TO_BE_REPLACED

It was a truism of mid-twentieth century popular intellectual culture that many disagreements were “merely semantic” and could be resolved if only people would agree on the meanings of the words they used, or at least were more clear about the different ways they used words so that they could focus on substantive issues rather than language.

It’s not hard to see that this idea has serious limitations. For instance, even though many legal issues surrounding abortion hinge on different definitions of the word “life”, when it comes to the moral side of the debate, definitions don’t change anyone’s mind. Usually we each choose the definition that matches an outcome we’ve decided on, not the other way around. But in mathematics (thank goodness for the consolations of math!), things are different. END_OF_DOCUMENT_TOKEN_TO_BE_REPLACED

The nice friendly way to play Twenty Questions is to select in your mind a secret something (a person, place, or thing) and to give honest answers to a bunch of true/false questions about it. A less nice way to play is to keep changing what you have in mind so that you can answer “No” to every question. That’s not a good way to keep friends, but something very much like it is a good way to generate a quasi-random sequence of bits. 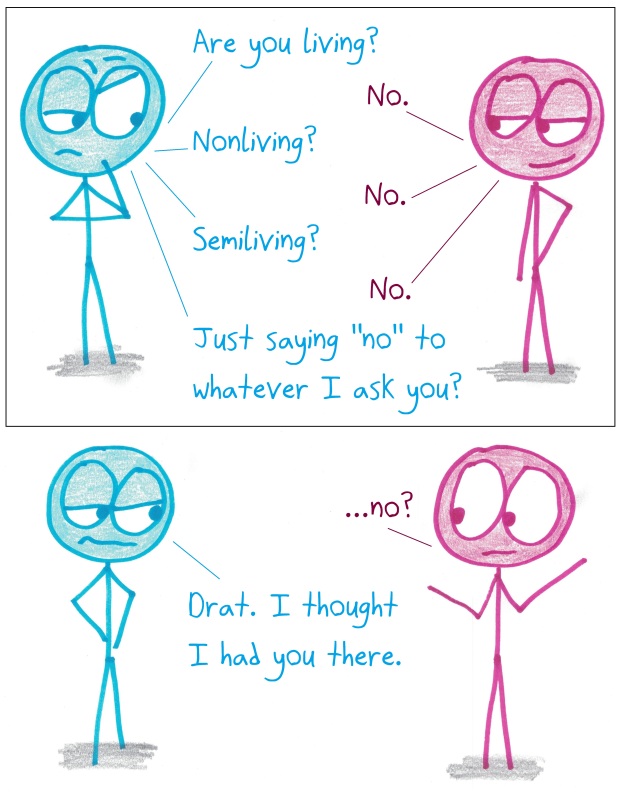 Cartoon courtesy of Ben Orlin. Order his new book “Change is the Only Constant” now!

END_OF_DOCUMENT_TOKEN_TO_BE_REPLACED

Again, obviously not — except that there is a way! (See my essay “Believe It, Then Don’t” for details.) So packing problems can be tricky.