Say you’re walking north across a meadow surrounded by hills when you come across a solitary doorframe with no door inside it. Stranger still, through the doorway you see not the hills to the north of the field but a desert vista. Consumed by curiosity and heedless of danger, you cross the threshold into the desert. The sun beats down on your bare head; you see a vulture off in the distance. In sudden panic you spin around; fortunately the doorway is still there. You run through the doorway back into the field, grateful that the portal works both ways.

You cross through the doorway into the desert again, and turn around, and once more you see the doorframe behind you, and through it, the southern hills surrounding the meadow. But now a question occurs to you: what would you see if, staying in the desert world, you went around the doorframe, and looked through the portal from the other side? What kind of new world would you see? Arctic tundra, maybe?

You trudge through the desert around to the other side of the doorframe, you look through the frame, and you are surprised to see, not some third world, but rather the northern hills you were walking toward before you discovered the portal — the very hills that you should have seen, but didn’t, when you first looked through the doorway.

That seems odd, but then you get to thinking. Then you retrace your steps, returning to the grassy field, and think some more. And then you go around to the back of the original doorway, the side you haven’t looked at yet, and you peek through it. What do you see this time? Desert again! But this time, you’re not surprised. You’ve started to figure out how this magic works.

Spaces joined together by magic portals are a staple of science fiction and fantasy literature: think of C. S. Lewis’s seven Narnia books, or Philip Pullman’s His Dark Materials trilogy. In The Subtle Knife, the second book in the trilogy, a boy from our world learns how to use the eponymous knife both to cut portals between worlds and to seal them up again. We make portals in mathematics too, using imaginary scissors and imaginary glue.

Let’s take things down a dimension, so I can show you pictures. Both the meadow and the desert are modeled as as rectangles of paper. To build a portal between the two worlds, we first use our mathematical scissors to make cuts along two line segments. To make the action easier to follow, I’m going to pull apart the ends of each cut and give them different colors.

Then we use our mathematical glue to join the red segment in the meadow to the red segment in the desert and the blue segment in the meadow to the blue segment in the desert. (You can’t really make a model of this in our puny three-dimensional world; even if you stack one rectangle above the other in the third dimension, the glued seams will cross each other. You need to imagine a teleporter that whisks you from one world into the other when you cross the magic line segment.) The result of this construction is a funny sort of two-dimensional geometry in which almost every point has a vicinity that exactly resembles a small patch of the ordinary Euclidean plane. But the two endpoints of our portal have 720 degrees’ worth of angle going around them, instead of the usual 360!

Now, this is not the only way a mathematical-magical portal could work. You could use mathematical scissors and glue to join together three different worlds instead of just two; you could have a portal that, as you repeatedly swing round and round with the same hand always touching the frame, gives you 360 degrees in one world, then 360 degrees in a second world, and then 360 degrees in a third world, before bringing you back into the first world: a “triply-branched portal”. Just join red to red, blue to blue, and green to green:

Now that I’ve explained the rules, I can ask some questions. How many alternate worlds might we be able to access if there were two doubly-branched portals available? Do you think the answer is 2? 4? 8? Something even bigger?

In fact, with two doubly-branched portals, there’s no limit on how many worlds we might be able to reach! Call the portals A and B. You can go through A, then through B, then through A again, and so on, and each time, there’s no reason the world you arrive at has to be one of the worlds you’ve already visited. You could name the worlds after the routes you take to access them: the world of A, the world of AB, the world of ABA, and so on. (And don’t forget B, and BA, and BAB, and so on.) It’s certainly possible to have ABA be the same world as BAB (for instance), but the mathematical-magical rules we’ve chosen to play by don’t require it. (But note that AABAB must be the same world as BAB, because the two A’s “cancel”; going through the same portal twice in a row is a “no-op“.)

The fascinating question Thurston raises in his video is, What happens if the doubly-branched portal is knotted? Like the trefoil knot: 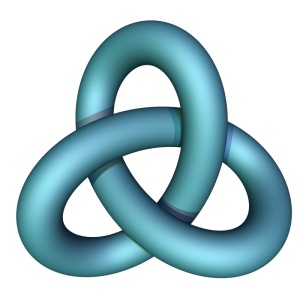 This trefoil knot gives us four different windows out of our world (three at the sides and one in the middle). But what does that even mean?

To get warmed up, let’s simplify the question and imagine a portal that’s shaped like a sideways figure-eight, giving us just two windows out of our world: 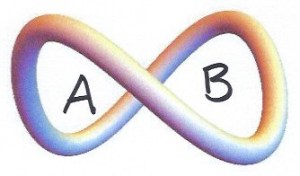 You might think those two windows (call the left one A and the right one B) could take you to two different Narnias, but they can’t, given the rules I’ve described. And you can prove it with a petite friend and a long stick.

Start with you, your friend, and the stick in your home world (Earth). The portal floats in the air waist-high, and your friend can fit through it. Have your friend climb through window A into Narnia. Push the stick through the window and have your friend hold one end while you hold the other. Now, holding your end of the stick, go underneath the portal and behind window B, without leaving Earth, while at the same time your friend pulls her end of the stick over the top of portal and in front of window B in Narnia. Wave to your friend! You’re on Earth, she’s in Narnia, and you’re looking at each other through window B. So window B connects Earth to the same Narnia that window A does.

(This operation is related to a simpler maneuver I find easier to imagine: in our ordinary world, a pencil going through window A from the back can be slid from left to right while rotating front to back until it becomes a pencil that goes through window B from the front.)

Yet another way to see what’s going on is to imagine positioning yourself directly above or below the portal. What I showed you before was the side view; seen from directly above or directly below, that twisty figure eight turns out to look just like a circle:

Now you see it’s not so obvious after all that the four windows in the trefoil knot will take us to four different worlds!

But I think I still haven’t done a good job of explaining what the question means, so I’ll let Thurston take the story from here. Check out his video:

Thurston specialized in the subfield of mathematics called topology. To learn more about Thurston’s view of knots, try the Geometry Project video “Not Knot“, which, like “Knots to Narnia”, is about knot-complements and their covering spaces.

Covering spaces of knot complements are hard to get a feeling for on a visceral level because we don’t live in a space like that. I hope someone who reads this will be inspired to make a video of a fly-through in Thurston’s covering space of the complement of the trefoil, or better yet, a virtual-reality experience in which you get to travel through that multiverse at will!

Oh, one last thing: What I told you about two doubly-branched portals was correct, but it made the assumption that the portals are unlinked. What if they’re linked, like this? 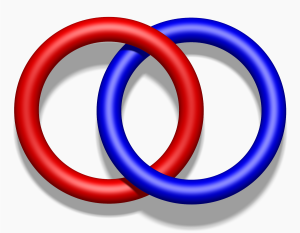 Try thinking it through on your own, and then see Endnote #3!

The Geometry Project, Not Knot.

Numberphile, What Is a Knot?

#1. It’s not a coincidence that the twisted but unknotted portal (the sideways figure eight) gave us the same sort of multiverse (one Earth, one Narnia) as the perfectly round portal. That’s because the two sorts of portal are topologically equivalent, and because the number of parallel universes is a topological invariant (that is, if two possible portals are topologically equivalent, then they each give rise to the same number of parallel universes).

On the other hand, the trefoil knot is genuinely knotted; it’s not topologically equivalent to the unknotted round portal, so it shouldn’t surprise us that the trefoil-knotted portal lets Thurston travel between more than two universes. 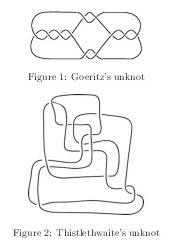 It turns out that the closed loop in each figure is unknotted, so the associated doubly-branched portal will only let you shuttle between two universes, just like the round unknotted portal and the twisted-but-unknotted portal. 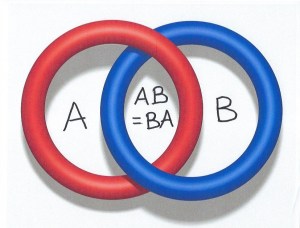 #4. To learn more about topology, see for instance the book by Massey. (And if any of you have good books or articles to recommend, please give details in the comments!) The arguments I’ve given gloss over some important ideas, but if I’ve intrigued you, this essay has succeeded.

1 thought on “Knots and Narnias”