Bella: You gotta give me some answers.

Bella (interrupting): I don’t want to know what the square root of pi is.

Edward (surprised): You knew that?

The square root of π has attracted attention for almost as long as π itself. When you’re an ancient Greek mathematician studying circles and squares and playing with straightedges and compasses, it’s natural to try to find a circle and a square that have the same area. If you start with the circle and try to find the square, that’s called squaring the circle. If your circle has radius r=1, then its area is πr2 = π, so a square with side-length s has the same area as your circle if s2  = π, that is, if s = sqrt(π). It’s well-known that squaring the circle is impossible in the sense that, if you use the classic Greek tools in the classic Greek manner, you can’t construct a square whose side-length is sqrt(π) (even though you can approximate it as closely as you like); see David Richeson’s new book listed in the References for lots more details about this. But what’s less well-known is that there are (at least!) two other places in mathematics where the square root of π crops up: an infinite product that on its surface makes no sense, and a calculus problem that you can use a surface to solve.

Factorials are a handy shortcut in many counting problems. If someone asks you how many different ways there are to order the 52 cards of a standard deck, the answer is “52 factorial” (meaning 52 × 51 × 50 × … × 3 × 2 × 1, often written as “52!”); this answer takes a lot less time to say than “eighty unvigintillion, six hundred and fifty-eight vigintillion, …, eight hundred and twenty-four trillion”. But how should we define n! if n is not a counting number? What if, say, n is negative one-half?

A practical-minded person might gibe that someone who wants to know how many ways there are to order a stack consisting of negative one-half cards isn’t playing with a full deck. But this kind of craziness is often surprisingly fruitful; the symbolisms we mathematicians come up with sometimes take on a life of their own, and living things want to grow. Or, as the great mathematician Leonhard Euler wrote (unless he didn’t1), “My pen is a better mathematician than I am,” meaning that notations sometimes precede understanding. By trying to extend the factorial function to numbers like −1/2 that aren’t counting numbers, Euler was led to invent2 the gamma function, which is important not just in pure mathematics but in applications.

Specifically, Euler showed3 that when n is a positive integer, n! is equal to the integral

For those of you who know coordinate geometry but don’t know calculus, this expression represents the area bounded by the vertical axis x = 0, the horizontal axis y = 0, and the graph of the curve y = xn e−x. Here e = 2.718… is the other famous nerdy number of math, dominating the world of exponentials and logarithms the way π rules the world of sines and cosines. The cool thing about that expression is that it makes sense when you replace n by −1/2 (corresponding to the area under the curve y = x−1/2 e−x in the picture below), and gives the value sqrt(π). 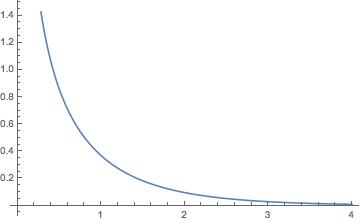 What’s more, if you find other integrals that coincide with n! when n is a positive integer, they’ll give you sqrt(π) when you replace n by −1/2. Metaphorically you could say that even though −1/2 times −3/2 times −5/2 times … times 3 times 2 times 1 isn’t equal to any number, the number it’s trying to equal is sqrt(π).

But what if we change the definition of convergence? Mathematician Ernesto Cesàro proposed a more permissive in which we take a sequence of numbers that annoyingly refuses to converge and replace it by a new, more tractable sequence whose nth term is the average of the first n terms of the old sequence.5

So I’ve shown you two different shady methods of assigning a value to the non-converging sum 1−1+1−1+… . One method considers the more general sum 1−r+r2−r3+…, finds an expression for it that’s valid for all positive r<1, and then substitutes r=1; the method is called Abel summation. The other method replaces the ordinary notion of summation taught in calculus classes by Cesàro summation. And here’s an even simpler shady proof: Let x = 1 − 1 + 1 − 1 + … . Then

What’s interesting is that even though these shady methods are shady in different ways, they all give the same value. This phenomenon − different shady methods arriving at the same answer − crops up a lot at the frontiers of math, and it often points to mathematical concepts that have not yet come into view. When we finally climb the hill that hid those concepts from view, we find that there’s nothing illegitimate about those concepts; they’re just more mathematically technical than, and not as attention-grabbing as, a formula like “1−1+1−1+…=1/2”. Such a formula, presented out of context, with all the sense-making scaffolding yanked away, is sort of like Lewis Carroll’s Cheshire cat: all that’s left is a (possibly infuriating) smirk.

An infamous example of mathematical YouTube sensationalism is the formula 1+2+3+… = −1/12 (and its less-celebrated sibling 1+1+1+… = −1/2). When equations like these are hyped outside of their proper context, math-fans sometimes respond with anger: “Those bastards are changing the rules again!” What often isn’t explained (because it’s fairly technical) is what the new rules are. What can and should be explained is that this rules-change is analogous to what you’d see if you were an American watching American football on TV and then changed the channel to watch Australian football. Well-educated sports fans don’t fume “They’re playing it wrong! Why, even my gym teacher knows more about football than these players do!”; they recognize that the Australians are playing a different sport. Same here, except that the name of the sport is “zeta-function regularization”6, it’s played with numbers, and the players are analytic number theorists, only some of whom are Australian.

LORD KELVIN’S DEFINITION OF A MATHEMATICIAN

The physicist William Thomson, better known as Lord Kelvin, was a big fan of mathematics, calling it “the etherealization of common sense” and “the only good metaphysics”. According to an anecdote recounted by his biographer S. P. Thompson, Kelvin was a bit of an awestruck fanboy when it came to mathematicians themselves:

Once when lecturing to a class he [Lord Kelvin] used the word “mathematician,” and then interrupting himself asked his class: “Do you know what a mathematician is?” Stepping to the blackboard he wrote upon it:

Then putting his finger on what he had written, he turned to his class and said: “A mathematician is one to whom that is as obvious as that twice two makes four is to you.”

This seems like an ungrateful way to treat a scientist who, when all is said and done, was just trying to praise my kind. But a mathematician is one to whom flattery is annoying if it is inaccurate. (See, I can overgeneralize too!)

represents the area under the curve y = e−x2.

The  ∫  notation, which we saw earlier, is due to Leibniz, who chose a stylized version of the letter “s” to commemorate the fact that the way we can compute such areas is by first approximating them as sums, and by then atoning for the error of the approximation by using ever-better approximations and seeing what the approximations converge to.

SOLVING A PROBLEM BY MAKING IT SIMPLER

Let’s talk about sums for a minute. Specifically, consider the problem of adding together all the numbers in the first four rows and first four columns of the multiplication table:

SOLVING A PROBLEM BY MAKING IT MORE COMPLICATED

Let A be the area between the x-axis and the curve y = e−x2, represented by Gauss’ integral. Then multivariate calculus can be used to show that A2 is the volume between the x,y-plane and the surface z = e−x2 e−y2.

Using the laws of exponents, we can rewrite that right-hand side as e−(x2 +y2). This crucial step reveals that the surface has a surprising symmetry: it’s rotationally symmetric around the z-axis.8 That fact enables calculus students to treat the space between the x,y-plane and the surface z = e−(x2 +y2) as a solid of revolution, and to compute its volume using the method of cylindrical shells. One gets A2 = π, from which it follows that A = sqrt(π): the formula on Lord Kelvin’s blackboard. (For more details, see John Cook’s writeup.)

I would modify Kelvin’s adage to say that a mathematician is someone who, having learned the preceding derivation, may not be able to remember the details, but remembers that circles play a role, and that the value of the integral therefore involves π. Or perhaps a mathematician is someone who finds the proof beautiful, irrespective of the beauty of the formula itself.

Gauss’ formula isn’t just a mathematical curiosity: the expression e−x2 is closely related to the famous bell-shaped curve of statistics, and the fact that the area beneath it is sqrt(π) explains where the π in basic statistical formulas comes from.

To go back to the classic problem with which this essay began: You can’t square the circle, but you can do something much more important, namely, you can prove

by interpreting the square of the left hand side as a volume and then computing that volume using circles.

To give Lord Kelvin his due, let me credit him for praising mathematicians for conceptual understanding, even if his praise strikes me as excessive. His adage is a lot better than something along the lines of “A mathematician is someone who knows the first half-dozen digits of the square root of π.”

#1. Can anyone provide a source, and/or the original non-English version of the aphorism?

which leads to a slightly annoying off-by-one issue: instead of Γ(n) = n! we have Γ(n) = (n−1)!. Another issue worth mentioning is that Euler’s definition only works for positive values of z; if z ≤ 0 the area under the curve becomes infinite. Fortunately a technique called analytic continuation can be used to figure out what expressions like  Γ(−1/2) are “trying” to equal, but discussing that would take me too far from my theme.

Here’s a plot of the gamma function (notice that it is undefined when z is zero or a negative integer):

The values of Γ(z) for z = 1/2, 3/2, etc. play a role in the general formula for the volume of an n-dimensional ball of radius R. This volume is given by

#3. Some facts about the gamma function are hard to prove, but one that’s doable by first-year calculus methods is the formula Γ(1) = 1 (using improper integrals). It’s only a little bit harder to prove the formula Γ(z+1) = z Γ(z) using integration by parts. With these two formulas, we can go on to prove

#5. Cesaro’s definition is a conservative extension of the original limit concept. If you have a sequence that converges to some limit, then its “Cesàro-ization” converges to the same limit. The value of Cesàro’s method lies in the fact that that Cesàro-ization of a divergent (i.e., non-convergent) sequence is sometimes convergent. But the averaging trick isn’t a panacea; lots of divergent sequences remain divergent after you take those running averages. For instance, the series 1 − 2 + 4 − 8 + … converges to 1/3 by Abel summation, but no matter how many times you applying Cesàro’s trick to the sequence of partials sums, you get a divergent sequence. And neither Cesàro’s trick nor Abel’s lets you assign a meaningful finite number to a sum like 1+1+1+… or 1+2+3+…

Presh Talkwalkar, “What is the Factorial of 1/2?”

blackandredpen, “But can you do negative factorial?”

2 thoughts on “The Square Root of Pi”